After the great success of Matlock 2000, the 3rd Towndrow Family Reunion took place on the weekend of July 13th & 14th, 2002 at Niagara-on-the-Lake, Ontario, Canada.

Newark, as Niagara-on-the-Lake was originally named, became the First Capital of the Province of Upper Canada. The small quaint Old Town of ‘NOTL’, steeped in history, and delightfully modern in amenities, provided a perfect setting for a family get-together.

Saturday began with a steady trickle of T’s (and ex-T’s) into the church hall on a leafy side street in NOTL. John and Martin T from the UK provided the usual registration packs and there was a wealth of local information to browse.

The centrepiece of the wall displays was again Art T’s very substantial printed version of the Family Tree, now a little out of date, but a real eye-opener for those new to the Reunion ‘scene’. An excellent companion was the entire Australian family tree, superbly crafted and supplied by Glenn T. More cuttings and collateral, new and old, rounded out the room.

New acquaintances were made and old ones renewed until, and during, the excellent buffet lunch. After this, Jim, John, Martin and Ralph T welcomed us all. Relative local John T then gave us an enlightening talk about the Quilt project, headquartered in Canada, followed by a Family Tree update from Art and a website update from yours truly. Ralph showed off the Towndrow Coat Of Arms which he had had created by a local craftsman in England. After an Open Floor discussion, we stepped out into the blazing sun for group films and photographs.

Late afternoon was spent at leisure, some exploring the delightful town centre, before we all reconvened for a relaxing evening’s BBQ dinner and many interesting conversations. 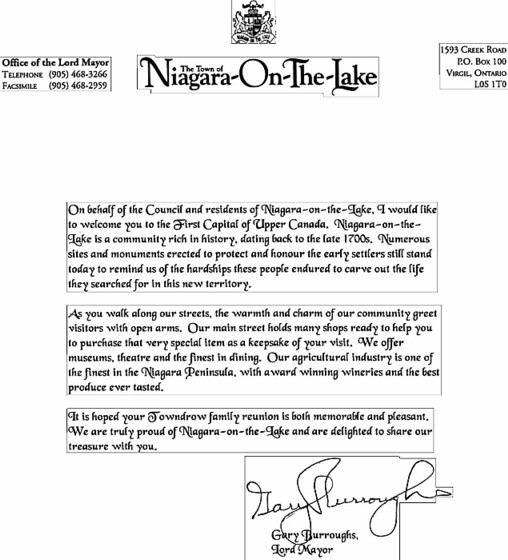