Our earliest record of the Towndrow name is before 1500. Before that, we get mired down in variations on the name, which makes it so much harder to trace back Towndrow origins. Theoretically though, we can trace how the surname became first ‘mutated’ from a Townrow, Townrowe, Townerow, Townroe, Tounrow, Towndro or Towndroe. Many of these are listed as residents in what is now Derbyshire / Leicestershire / Nottinghamshire / Yorkshire in the earlier 1500s and beyond. There are also records in East London at that time.

Origin of the Towndrow Name

“I was led to believe that an architect designed London city dwellings following the Black Death. The housing had each floor wider than the one below it, reason being the prevention of night soil from running down the building. This, coupled with new open flowing sewers running down the middle of the road, led to improved sanitary conditions whilst at the same time increasing density of occupancy. The architect responsible for this was knighted Sir Townsrow or Town Row. BUT the fire in Pudding Lane some years later caused devastation due to a fundamental design error. Because the roofs got closer with each successive floor that was added, after many decades the rooftops touched, causing the rapid spread of the Great Fire. Shortly afterwards, the family changed its name to Towndrow to avoid notoriety.” from Steve Towndrow of Manchester

The Towndrow Coat Of Arms

On 4th April 1826 a grant of armorial bearings was made to Henry Payne of Newark, County of Leicester, England. Henry Payne had married Elizabeth “late the only surviving child and heir of Edward Towndrow late of the Town and County of the Town of Nottingham” (both deceased) and wished, “out of affectionate regard to their memory” that arms be assigned to Towndrow.
The grant made by the College of Arms to Henry Payne included the Towndrow arms, namely, “Gules a Cross Ermine between four Lozenges Or each charged with a Pellet” to be borne in the second and third quarters of the Payne shield.
As the arms of Towndrow were quartered with those of Payne, the arms of Towndrow, in strict heraldic law, could not be borne on their own or by anyone other than a male descendant of Henry Payne and Elizabeth but their adoption as the badge of the Towndrow global clan would be unlikely to be challenged. 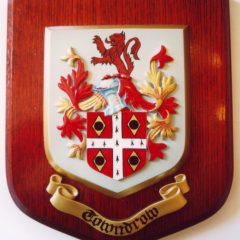